Upon its completion in the 1760s, the Great Courtyard, designed by Augustin Ehrensvärd, served as the main square and administrative centre of the fortress. The houses surrounding the courtyard included the fortress commandant’s house and the main guard house. 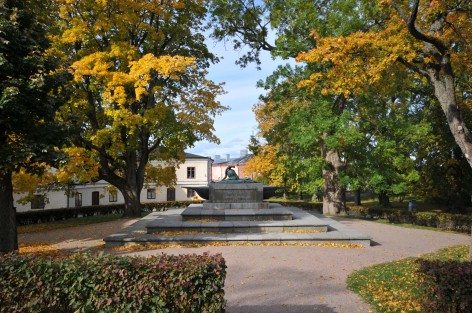 The administrative centre was given a suitably impressive architectural setting: careful placement and concave facades of the buildings around the courtyard created a false perspective which made the courtyard look grander.

In the middle of the square you can see the tomb of Augustin Ehrensvärd. The memorial was designed by King Gustav III of Sweden together with Augustin’s son Carl August Ehrensvärd and Johan Tobias Sergel.

Augustin Ehrensvärd died in 1772. He was temporarily buried elsewhere for 10 years until the tomb in Viapori was finished. The monument was completed in the early 19th century, just before the end of the Swedish rule in Finland.

The Great Courtyard was badly damaged in bombardments during the Crimean War in 1855, but it is still an impressive sight. It is today surrounded by residential buildings and the Ehrensvärd Museum, located in the former Commandant’s House.

Distance from the main quay is about 1 km. Waterbuses operate to the Artillery Bay quay during the summer season. The distance from there is approximately 200 metres.