Piirtämö, renovated in the former premises of the National Board of Antiquities, is a light and spacious conference room. The windows open onto Tykistölahti bay. 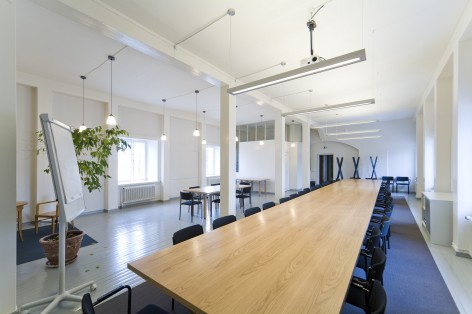 The Piirtämö conference room is located in a building called the Traverse Adlerfelt. The renovation works in the upper floor of the building were started when the National Board of Antiquities closed its Suomenlinna office in 2007. The Piirtämö hall was transformed into a conference facility, including the adjacent small kitchen, toilet and work room The old furniture from the National Board of Antiquities has been used to create a seating area for the meeting room. The room was available for use again after the renovation at the beginning of 2008.

The kitchen is equipped with a refrigerator, stove, microwave oven, coffee maker, electric water heater and a coffee set. Coffee for your meeting can easily be made on the spot, and the Restaurant Susisaari, located downstairs, is the perfect place for lunch.

A traverse is a wall, berm, fortification or building perpendicular to the shadow road, blocking direct gun fire in the entrenchment. The traverse divides the defence line into two independent parts.

The Traverse Adlerfelt was built in the 1750s and 1770s as part of the outer fortification protecting the Susisaari galley docks. The sea-side façade was built as a defence wall to protect against gunfire from Vallisaari island. The granite casemates of the lower floor had embrasures for cannons and the first floor, built from brick, had a dense row of embrasures for rifles. In the 1780s, more storage space was added to the building for the expanded coastal fleet, and the vaults on the bottom floor were replaced with a wooden intermediate floor. The topmost mansard floor was converted into a normal floor and an attic floor was built on top of it.

The topmost floors burned down in bombardments during the Crimean War, after which the building was lowered to two storeys and covered with a tin roof. The Traverse Adlerfelt, which also operated as the storage for Russian artillery, was transformed into its current appearance in approximately 1864–1866. At the end of the 1800s, the last remaining parts of the caponiere Adlerfelt were torn down.

During the beginning of the Finnish era, the building was home to the canteen of the air force’s aircraft factory, which operated in the docks. In the 1930s, the building was transferred to Valmet Oy to be used as storage and accommodation facilities. When the war reparation industry was at its most active phase in the docks, the docks’ office and the workers’ social premises were located in the building. The canteen was located downstairs. In 1986, the first floor, with the exception of the flat at the south end, was renovated as office facilities for the National Board of Antiquities.

Take a 360 look at Piirtämö